I recently purchased a copy of the 5D Mark IV to replace and supplement my current 5D Mark III. Naturally, when getting a new camera that is said to be better than the older model, a number of questions arise such as, sharpness, noise levels, and dynamic range improvements; as well as possible color balance differences. The last thing you want is a color balance mismatch between the older of the newer models, as one the elements that defines photographic style is how color is handled. With that said, here is a quick summary of what I have found over the course of several weeks of testing:

For this test, a Canon 180 mm F-3.5 macro lens was mounted on a tripod with a camera to subject distance of approximately 80 inches. The cameras in turn were each attached to the back of the lens and then set to F-7 .1, with a shutter speed of 3.2 seconds under constant artificial light. Focus was done manually in live view at 10 X magnification. The results of USAF 1951 test target, shown below, indicate that for this lens under this test condition, both cameras resolve group 2 pair 4, with perhaps a slight edge to the 5D Mark IV with its image size being reduced by a factor of .857 to match the image size produced by the 5D3. When viewed at 100%, or actual pixels, 5D4 was seen to resolve one pair better, pair 5. That said, it is doubtful that this difference in resolution would be of noticeable significance in a printed image. However, I suspect that the difference between the two cameras would be greater, if a higher resolution lens had been used. The 180 mm F-3 .5 macro is an old lens design, but still in wide use. It was picked so that the lens to target configuration would not be changed when changing cameras.

Using the same setup as above, a Macbeth ColorChecker was similarly photographed. When the resultant RAW images from both cameras were converted to TIF files using Photoshop camera raw with the camera calibration camera profile set to the default “Adobe Standard,” there was a distinct difference between the two with the reds and blues appearing noticeably more saturated and brighter. In-camera picture style settings for raw files are not recognized by Adobe camera raw. However, they do have camera profiles that perform a similar function. Some of these are, Camera Faithful, Camera Neutral, Camera Standard, Camera, Landscape, etc. that give a distinctive “look” to the rendered image. In this instance however, it turns out that virtually identical color response can be obtained by setting the in-camera picture style to Neutral in both cameras and setting the camera raw camera profile to Camera Neutral for their TIF processed images. An example of the response for red can be seen below: 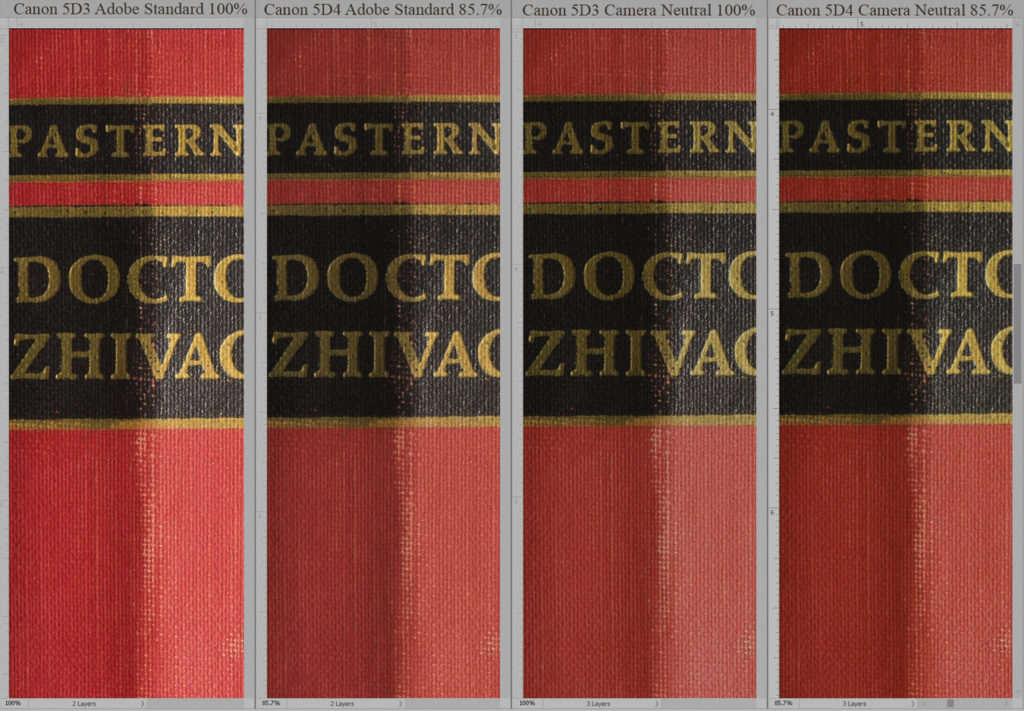 Although the sensor size of the 5D Mark IV has been increased 36.3% over that of the 5D3, 22.3 to 30.4MP, the increase in image size is only ~16.7% in any one dimension. The issue of concern here is the impact on noise from the necessarily smaller pixel dimensions of the 5D4, 5.36um vs. 6.25um for the 5D Mark III. To test this impact both cameras photographed the same scene at ISO 1250 following the procedure for image sharpness, above, but were underexposed by 5 stops. Then the files were given a 5-stop boost in Adobe camera raw before conversion into TIF files. As can be seen below, the 5D Mark IV image has significantly lower noise. Some of this results from reduction in file size to match the 5D Mark III, but the some also arises from lower noise electronics in the new camera. So, in conclusion, the 5D Mark IV camera has  both improved image quality and larger size in addition to its many new and useful features. 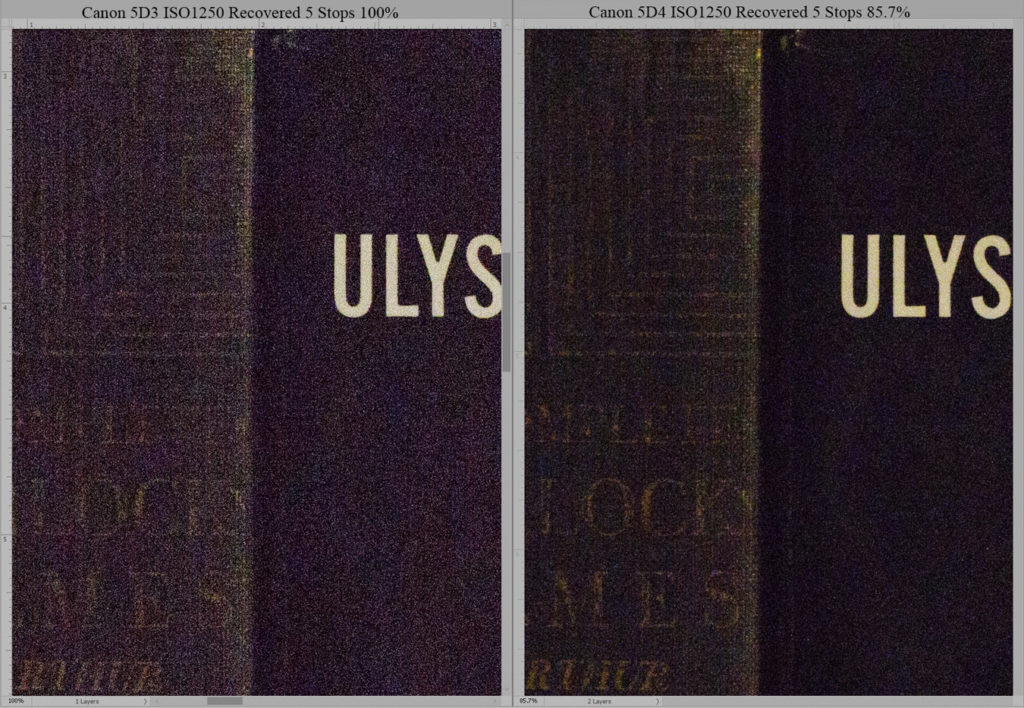