I recently purchased an Epson SureColor P800 desktop printer.  Since it features the new 8-color Ultrachrome HD inks that are claimed to have a wider color gamut [the entire range of colors that can be produced by a given device] and print darker blacks, I couldn’t wait to test them against the older 8-color Ultrachrome K3 inks of my Epson Stylus PRO 7800 large format printer.

Epson Ultra-Premium Photo Paper Luster was chosen for the test print medium, as it is a good representative of the “glossy” type photo papers, which have a much wider color gamut that matte photo papers. Printer profile targets were generated by each printer printing 729 color patches generated by Monaco Proof 3.7.0 profiling software.  After being allowed to dry overnight, the color patches were measured with an i1 spectrophotometer.  Monaco Proof then generated the color profile for each set of prints.

For the analysis, the profiles were entered into Color Think Pro 3.0.3 set to display in L*ab mode. The RGB color mode is fine for many things, but its primary disadvantage is that luminance is confounded with saturation. L*ab mode solves this problem by making luminance a separate channel. The L channel has a value of 0, dark, to 100, bright. The a channel (Green – Magenta) runs from -128 to +127, while the b channel (Blue – Yellow) runs from -128 to +127. Higher values of either the a or b channel, either positive or negative, indicate a higher degree of color saturation.  Thus middle or neutral grey has an Lab value of 50, 0, 0. 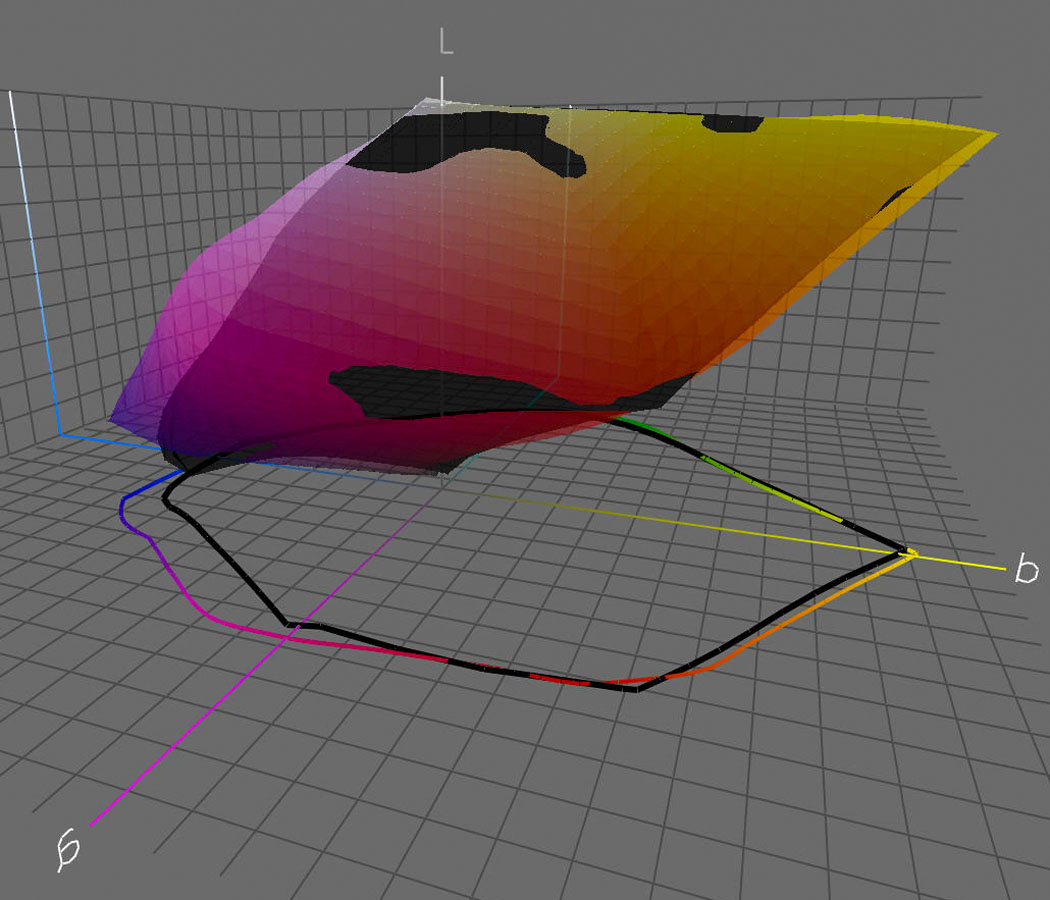 As can be seen, the new HD inks do indeed have a significantly increased magenta- blue gamut, while orange – yellow is slightly increased.  The black splotches of the K3 inks in the 3D plots can be seen slightly exceeding the gamut of the HD inks in some areas. Otherwise, the K3 ink gamut is seen as residing inside the gamut of the HD inks as a darker area of colors. So what does all this mean?

That question deeply depends on what subjects you are trying to print. For most things, it would be difficult to see the difference, except perhaps by a side-by-side comparison. To try to illustrate this, I printed a copy of Digital Outback Photo’s Printer Evaluation Image V002, seen below, using both printer inks onto Epson Ultra-Premium Photo Paper Luster. 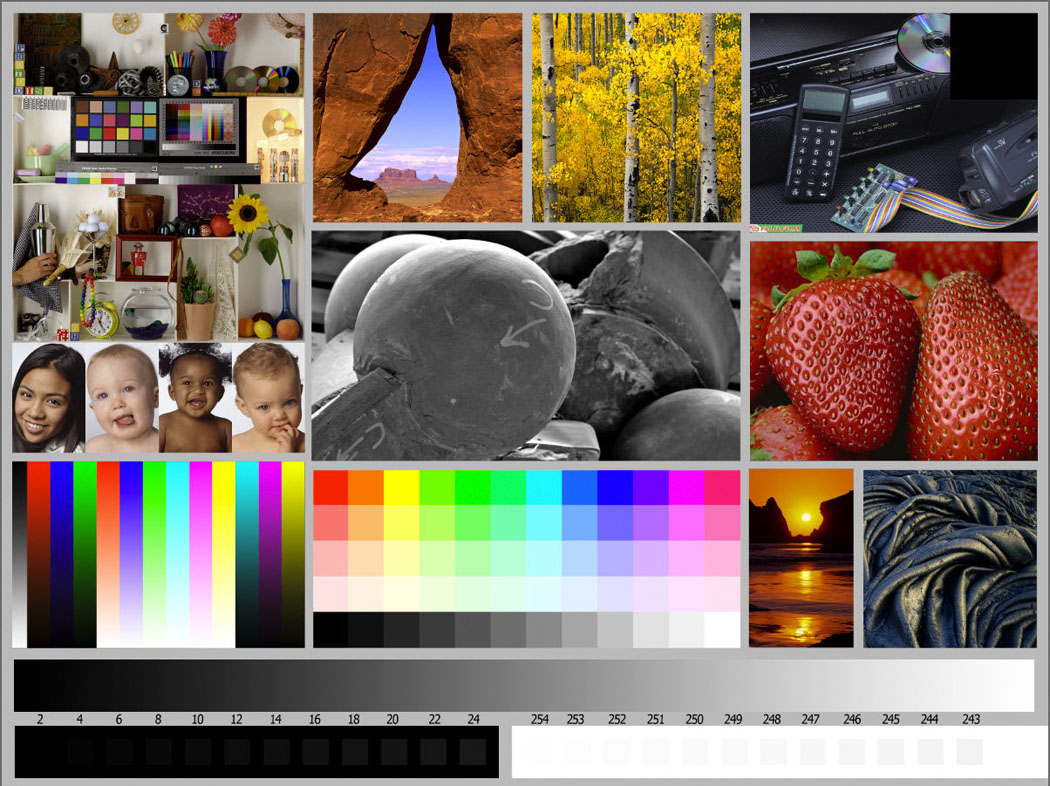 Visually I could not see a real difference between the images produced by the HD and K3 ink sets except for the slight increase in saturation of the left strawberry of the comparison shown below.

As to the blacks, a comparison of the luminance values of the RGB 2, 2, 2 patches at the bottom of the printer evaluation image was made using the i1 spectrophotometer and Babble Color CT&A. It showed only a 1.3% darker and slightly more neutral patch for the HD inks [in RGB 15,15,16 vs 16,17,18 for the K3 inks]. The smaller and lighter K3 ink square is contained in the larger HD ink square. See if you can see it! 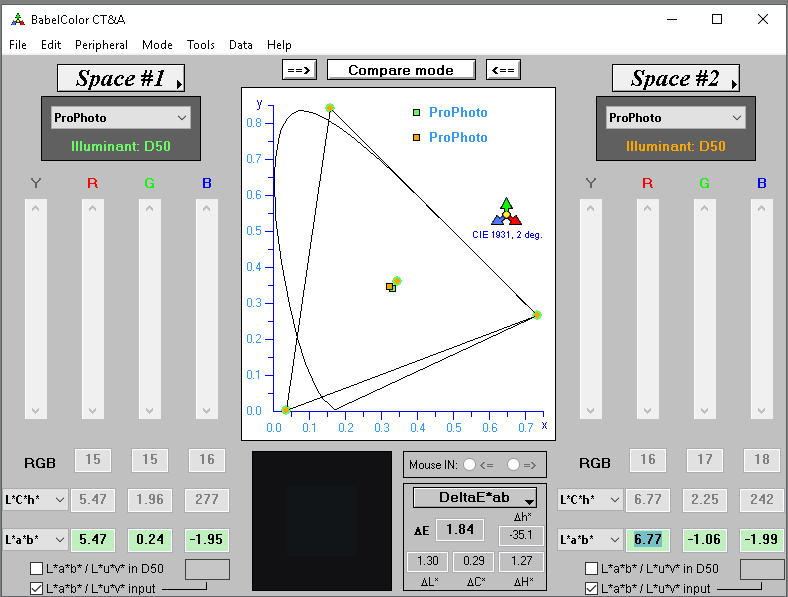 So, should you run out and buy a new Epson printer just because of the new Ultrachrome HD ink set. I don’t think so. However, the new HD inks have been shown to provide 2X the fade resistance of the K3 ink along with reduced bronzing. If you are buying or intend to buy a new printer at some point, knowing that the HD ink set is better able to handle anything you’re likely to throw at it to print photography is comforting. However, if you make photographic copies of oil paintings that have highly saturated colors, are making prints for advertising or other such subjects that demand high the highest color accuracy, then you should consider the 10-color HDX ink set.